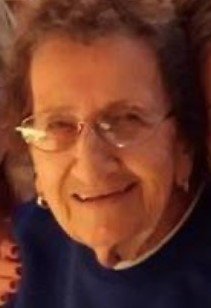 Dorothy H "Sally" Sicina McMullen a split resident life between New York City then Wyckoff, NJ entered into rest on Monday, February 10, 2020 at Christian Health Care Center, Wyckoff, NJ. The daughter of the late Joseph C and Mary Wozniak Sicina, she was born on June 9, 1926 in Florida, NY. She married the late Edwin Daniel McMullen, who predeceased her in October 1976. Dorothy was a musical artist in the singing duo of "Sally and Marvin Clark". She also worked as an Administrative Assistant in later years. She is survived by her children, Annette and husband Per Karlsson of Clifton NJ, Mary Ellen and husband Freddie Reyes of E. Stroudsburg, PA and Patrick and wife Loretta McMullen of Passaic, NJ. She is also survived by her five grandchildren, Jacqueline and husband Michael Persico and Nicklas Karlsson. Jennifer and husband Alexis Louis-Rudloff, Ryan Reyes and Stephanie Reyes. She is also survived by her great grandchildren, Gaia, Disa, Michael James and Madison Kate. She was predeceased by seven brothers and sisters. Visitation will be held on Friday, February 14th from 4-8pm at T.S. Purta Funeral Home, 22 Glenmere Avenue, Florida, NY 10921. Funeral Service will be held 11AM Saturday, February 15th at the funeral home. Burial will be in St Joseph Cemetery, Florida, NY along with her husband Eddie. Memorial contributions may be made to Alzheimer's Foundation of America, 322 8th Ave, NY, NY 10001.

Share Your Memory of
Dorothy
Upload Your Memory View All Memories
Be the first to upload a memory!